Hubby had his birthday in early October and I decided to pamper him with an overnight stay and dinner at Haikko Manor & Spa. This is one of those places where we return regularly for relaxing minibreaks away from the daily grind. The manor hotel was opened in 1966 and expanded in 1974 when the spa hotel was completed and again in 1983 when the congress center was opened. Today the hotel has over 200 rooms of which 24 are in the manor house and 184 in the spa hotel.

The first historical recording of Haikko manor is from 1362 and the manor was owned by the Stenbock family until 1871 when it was sold to General Sebastian von Etter, whose family owned the manor for nearly 100 years. The manor has housed many famous guests including the grand duke Kirill Vladimirovitš Romanov and his family, painter Albert Edelfelt, and Carl Gustaf Emil Mannerheim. The current manor house was designed in 1913 when the previous manor house had burned down. Due to the war, the construction was not completed until 1932.

We arrived at Haikko on Saturday afternoon and spent time in the spa, after which we withdrew to our room to have some champagne and relax before dinner. Dinner was a four course Menu Nordic  designed by Chef Pekka Terävä, who is the co-owner of the one Michelin star restaurant Olo in Helsinki. The dinner was served at the Manor restaurant, in the main dining room, which was originally planned as a chapel. The restaurant has an historic ambiance of the Russian imperial era.

We started with an aperitif, I had a G&T and hubby had a Bloody Mary. Then we were served Cep soup with deep fried kale. The soup was lovely with good-sized chunks of mushroom. Next came a Tartar of lamb from Åland served with pickled chanterelles. The meat simply melted in the mouth and the pickled mushrooms provided a nice vinegary contrast to the meat. The main was fish: Roasted trout with horn chanterelle consommé. The fish was very well seasoned and cooked. Dessert was Apple porridge with Kyyttö’s milk ice cream, which was a nice refreshing dessert. With dinner we enjoyed a nice bottle of white wine. The menu was a well though through whole that was very tasty. To round off the meal that left us stuffed we headed to the Manor Club for a night cap. The surroundings were a bit shocking but the whiskey went down well. 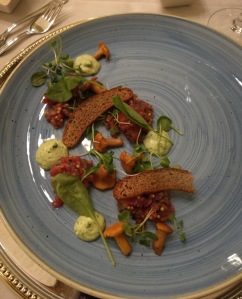 In the morning we went for a morning swim, had breakfast in the Romanov Dining Room which is part of the Manor restaurant, and then we headed back home. This was a great way to spend a weekend relaxing in historic surroundings with a cozy spa and delicious dinner. And the best part is it’s only a thirty minute drive from home. We will probably be back again in a few years.

I would love to hear your thoughts Cancel reply

Passionate traveler and foodie from Finland. I love exploring new places and usually do so with my hubby. Life is better with a dash of luxury, so you’ll not catch me backpacking through Europe, sleeping in hostels or camping. Writing is close to my heart and blogging is a great way to share my musings. Photographing has been a hobby of mine ever since childhood. Welcome to my adventures, hope you enjoy my blog. All pictures are mine unless otherwise contributed. Please do not use pictures without my permission.

In this bleak and rainy winter I so miss the turqu

For whom the bell tolls. Bells at Mission Basilica

Dipping my toes in the Atlantic in Florida. The oc

Another hotel breakfast, this time at Radisson Blu

The ceiling at the Finnish National Theater in Hel

The opera house in Oslo. I have an interest in arc

Peppers in a supermarket in Aruba. One of my favor

Hotel Rubens in Antwerp offered a nice room with a

The Lund Cathedral from 1145. I am by no means rel

Another sunset, this one in Oslo from the window o

Cheers for s Saturday. Gin and tonic is my go to d

Searching is in progress